In Georgian “jara” means a specially prepared hollow log that is put up there a tree in the middle of the forest to attract wild bees. Once a year a beekeeper comes to harvest honey. So one of those “jaras” will be a central character in this movie with all the wildlife around and local people – film is all about coexistence of pristine wildlife and traditional agriculture. Georgia is actually one of the very last places of Europe where it’s still possible. 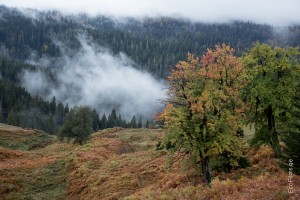 What makes Adjara region so unique is biodiversity. It’s a place that survived glaciation periods and kept it’s flora and fauna intact for thousands of years. Endemic species are present here in numbers both among flowers and plants. Biodiversity is not only about locals here: across the region is stretched so called “Batumi Bottleneck” – one of the biggest migration corridors of birds of prey in whole World. Every autumn and spring skies are darkened by millions of birds soaring on rising thermal streams. It’s not been long ago since birdwatchers of the world have discovered for themselves this natural wonder and now they arrive in numbers to witness it.

“Jara” will be filmed over a period of one year and all bees living in jara will share their stories to us during all four seasons. It will be a story of surviving bee-eaters, bears, invasive insects. But at the same time it will be a story of local people, who live nearby the forest, use it’s resources and still remain in kind of fragile balance with nature. Yes, at night bears are coming at night to harvest local man’s corn or bee-hive. But in daylight cows are grazing in the very same forest where bear lives and jara is hanging up there in a tree.