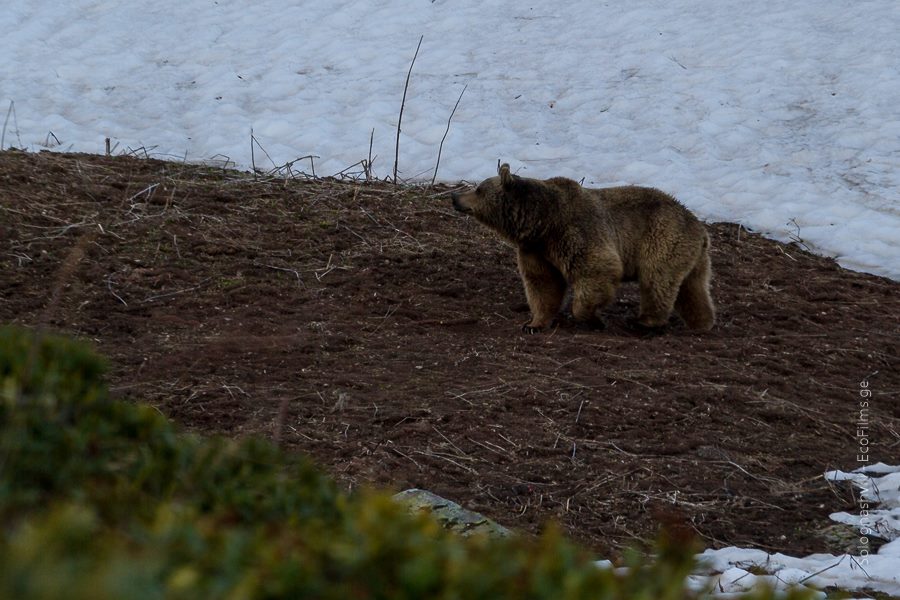 In Ajara human settlements encroach on the habitats of bears much more than in any other part of Georgia. The Forest starts where the garden or small holding ends. With cultivation so close to wild nature, it is not surprising that bears come in close proximity to people and their livestock. Conflicts between them are therefore frequent. Bears often raid fields and beehives.

Ajara provides plenty of food for bear. According to existing data there are more bears here compared with other regions. This happens because productivity and climate of the forest are favorable and because the bear population of Ajara is merged with the population resident in forests in Turkey without any significant barrier between them.

Killing bears is not popular in Turkey, they are perceived almost the same as pigs by the Muslim population. Hunting bears for sport and entertainment is not characteristic for Ajarians either.

The Brown bear is a peaceful animal . There are very few recorded incidences of unprovoked attacks on humans. The bear itself always tries to avoid people. It may frighten them, but very seldom does it attack if not attacked first by a weapon.

Bears have very long history of coexistence with humans, developing it over centuries. Particularly aggressive individuals have been culled by people and a less dangerous population has developed.

Due to the warm climate the bear in Ajara goes in to hibernation relatively late. Sometimes even in December it still looks for food in snow. In spring it leaves the den early, in the middle of March. However the pregnant female will go to the den early, because the birth can happen only there. After the bear-cubs are born, they need the physical closeness of the mother for a long time, because the newborns have no thermoregulation and if left alone, they can freeze and die. If at the beginning mother bears have a less developed maternal instinct and leave cubs because of humans passing near the den, later they will stand between them and people until the cubs run away and the danger for them becomes less.

Bears cover very large areas. The individual habitat of one male may be up to 500 square kilometers, which is less than even the largest protected area in Georgia. That is why it is so difficult to protect bears and their habitats.

The Brown bear is on the Red List (list of endangered or extinct animal and plant species) of Georgia, as an endangered species, though, from the point of view of conservationists, this does not assist the conservation and growth of the bear population. To their opinion, different legislative regulations are needed –the creation of reserves, introduction of sensible hunting quotas, attracting hunters and getting local people interested in bear population as the resource that should be protected and taken care of for the future.