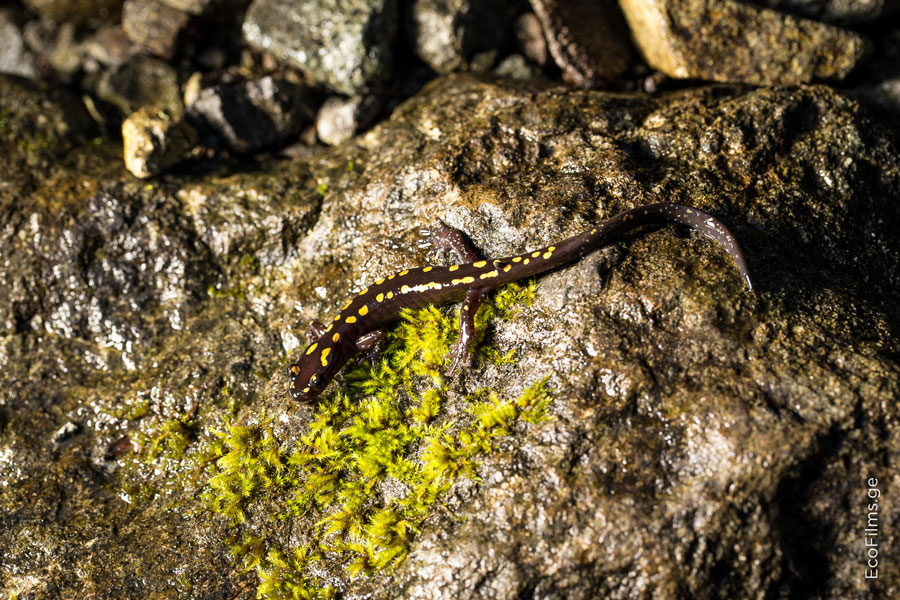 The Caucasian salamander is a tailed amphibian, dwelling only in the western part of the Lesser Caucasus, in Georgia and Turkey. It is listed on the International Red List as one of the most vulnerable species, because of its small habitat and specific environmental requirements. It can be found in the Ajara-Imereti Range and in the extreme west of Trialeti Range, in Borjomi Gorge, Sairme and Asia Minor.

The Salamander needs a humid environment with a lot of precipitation. It lives mainly around springs, but stream water is not the only necessary condition. There must be humid soil at least at several tens of meters around it, so that the salamander will not dry and die. It cannot tolerate high temperatures. It needs mountain rivers, the temperature of which does not exceed 14-15 degrees, otherwise its eggs will not develop. The salamander is very delicate animal and its eggs need 3 months to develop, while frog eggs hatch in four days. That is why sometimes you can see the salamander at 2800 meters above sea level, in cold mountain streams and humid ravines.

The tail makes up more than half of salamander’s black and yellow body. The entire length of the salamander does not exceed 20 cm. During the day it hides under stones, in pores of soil and roots of bushes. Lying in water, it puts its small head out. Running on land it wriggles with its entire body and moves fast as a lizard. If you touch its tail it falls off, but will soon grow again. It feeds on insects, worms, small invertebrates.

This species was discovered and described in the nineteenth century and for more than a century it was considered a relative to European salamander though the European one is thicker and shorter. Nevertheless, later genetic studies have demonstrated that they are not related, but simultaneously developed species and the closest relative of Caucasian salamander dwells in the Northern Spain and Portugal. Bones of one more similar species have been found in tombs explored in Carpathian Mountains of Slovakia and Poland.

It seems that before the last glacial period salamanders were widely spread in Caucasus and in all mountainous systems of Europe. But in Central Europe they died out during the ice age and remained on two separated islands – on Atlantic Ocean and Black Sea coasts.

It is difficult to estimate how many individuals of the Caucasian salamander are left, because counting them even in one small gorge needs several years of routine work. Nevertheless, one can speak of risks for the species without knowing their exact number.

Ecosystems suitable for salamanders nowadays are facing lots of difficulties. The main reason for this are forest cuttings. Whether legal or illegal, they are often done with unsustainable methods. Trees are cut around streams, because this places are easier to get to and logs are transported by the water. This way the stream itself is harmed as well as its function as a habitat. Eggs are destroyed and also the plants around the stream, so it becomes impossible for salamander and similar species to survive. That is why Caucasian salamander is an indicator and clear sign of how much its habitat, forest, is protected and preserved.