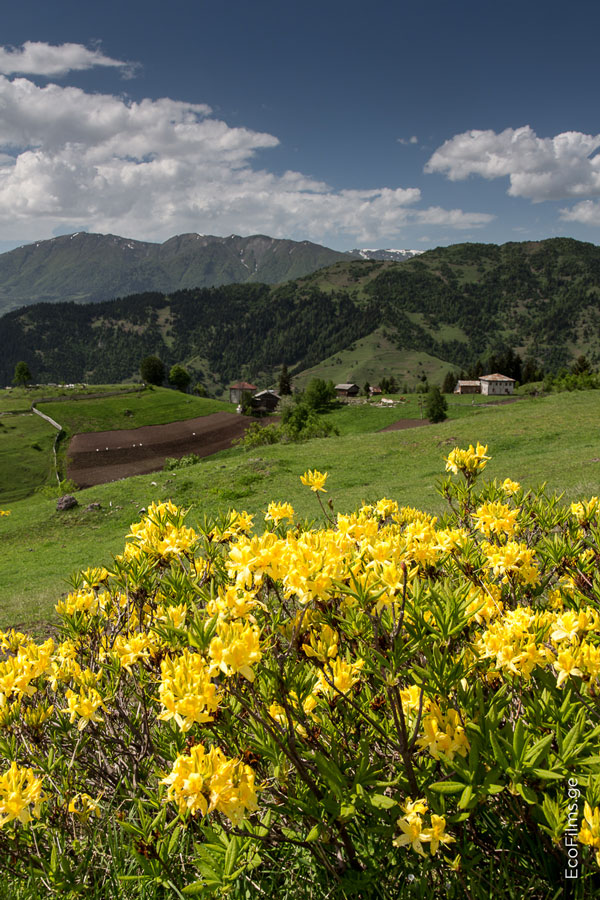 Even May honey, which in general consists of acacia honey, is not the same across Ajara. In Kobuleti for example the acacia is added to by citrus blossom. And so it varies for every zone according to altitude.

Some people think mad honey is a poison, others a source of narcotic inebriation. In reality this is just intoxicating and unhealthy honey. These qualities of certain honey in this region have been attributed to the large quantities of azalea (rhododendron) blossoming here, in the nectar of which andromedotoxin glycoside has been discovered. While gathering pollen for feeding larvae, from some plants bee takes both pollen and nectar, for example, from azalea. But if there is a lot of azalea blossoming, the chemical composition of the honey and the level of natural neurotoxins can influence a person’s nervous system. A person can become euphoric and sometimes have hallucinations. However “mad honey” is not poisonous. A lot of liquid can soon bring the person back to normal and number of plants which can cause such intoxication is not large.

This intoxicating honey was already known in ancient Greece. The ancient Greek commander and writer Xenophon-of-Athens from Asia Minor, writing about return to Greece after battle with Persians, describes in detail how the honey taken from local hives in Colchis near Trabzon, made his soldiers ill.
‘There were a lot of beehives around. Soldiers ate comb-honey and soon lost their senses. They could not stand on their feet, and those who had eaten a lot did not behave like normal people at all: they went mad. Several soldiers were almost dying. But the next day all people came round at the same time of the day they became ill yesterday. They soon got up, though felt like they had taken lots of medicine’.
It should be mentioned that according to historic sources Roman soldiers were not as lucky as Greek ones. Several hundred years after the events described by Xenophon-of-Athens, Roman commander Gnaeus Pompeius Magnus was pursuing the king Mithridates of Pontus and his army along the Black Sea coast. The soldiers of Mithridates had left vessel full of honey to be easily found by the Romans. Roman soldiers ate the honey, lost their senses and the army disintegrated and was weakened. Soldiers of the King of Colchis then easily defeated the one thousand Roman warriors.
In the end of the nineteenth century bee-keepers around Batumi knew well that eating honey during specific periods of time caused giddiness, nausea and feelings close to drunkenness.